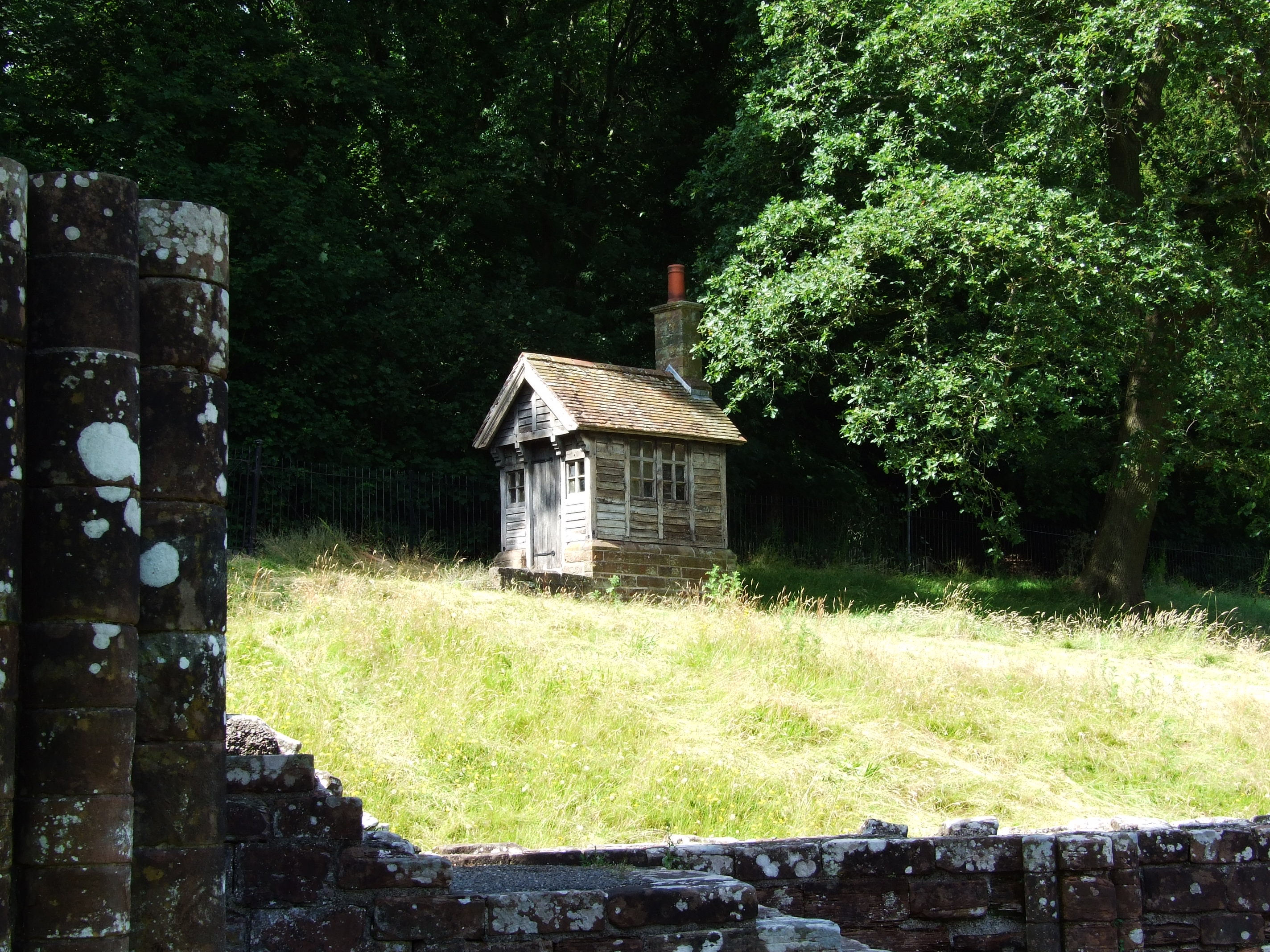 In my thesis — A Prospect of Ruins – Discovery, exploration and contemplation — I ask how we address the ruin in its setting, and argue that our arrival is key. One of the most pressing impediments to our discovery of ruins in an eighteenth-century idiom is the ubiquitous visitor centre which has frequently supplanted ticket kiosks as the de facto entrance point to heritage sites.

Today one of the last vestiges of a once-simpler arrival at a monastic ruin forms part of the setting of Byland Abbey in Yorkshire. Here, in a simple kiosk, a custodian shelters from the elements — you buy your ticket, perhaps even a guidebook or restorative hot chocolate — you then visit the ruins. As Simon Thurley explains in his book Men from the Ministry, “Few of the many early custodians’ buildings remain today, but at Furness Abbey there is the sole survivor of a pre-war ticket office. Just large enough for one man and a small till, some postcards and guidebooks, the hut has its own fireplace and chimney, a generous amenity for its occupant.”((Thurley, Simon. Men from the Ministry: How Britain Saved Its Heritage. (London: Yale University Press, 2013). pp 159-160.))

The charming Arts-and-Crafts ticket office at Furness Abbey now stands ignored–superannuated by a (now) period-feature 1980s visitor centre — but it offers the tantalising prospect of its original purpose being reinstated, and the setting of the abbey to once again be appreciated on arrival. Macaulay reiterates the importance of setting, “So we have all felt and feel. … A good setting is, to the average ruin-seers, a good deal more important than interesting architecture; these need some background of knowledge; the pleasures of picturesque setting, only a simple sense of beauty.”((Macaulay, Rose. Pleasure of Ruins. Edited by Smith, Constance Babington. (London: Book Club Associates, 1977). p 133.))

The Office of Works formula

The Office of Works (a forerunner to English Heritage) developed a strong aesthetic for their sites when Sir Frank Baines held the post of Chief Architect in the 1920s. From Thurley we learn that “Interventions were almost always of elm; [and that] walkways, staircases, handrails and barriers were all oak allowed to silver naturally and harmonise with the walls of the monuments.”((Thurley, Simon. Men from the Ministry: How Britain Saved Its Heritage. (London: Yale University Press, 2013). p160.))

Whilst almost all of the original Arts-and-Crafts style buildings may have disappeared from English Heritage sites, we find the Office of Works aesthetic lives on in the revival of unstained wood on todays’ kiosks.

An overview of kiosks

This kiosk is one of a pair dating to c1900 and is Listed Grade II.((“1394518 – The National Heritage List for England | English Heritage”, Available at: http://list.english-heritage.org.uk/resultsingle.aspx?uid=1394518 [accessed January 28, 2015].)) It represents a design with is both functional and highly decorative. The kiosk provides shelter for the ticket-seller and a roof for the punter. Its flamboyance contrasts with the silvered Office of Works kiosk, and demands an appropriate setting such as a recreation or pleasure ground.

Lutyens was commissioned to design a number of buildings at Runnymede, including a pair of kiosks to flank the road, balanced at the far end of the meadows by a pair of lodges. These kiosks evoke a monumentality appropriate to their purpose as a funerary memorial.

The ticket office at Colbost Folk Museum in Inverness-shire demonstrates the picturesque style of kiosks, ramshackle constructions cobbled together to serve their purpose. Here, an upturned boat from the roof forms a quaint picture, but in other cases picturesque kiosks might be formed of unplanned wood and evoke the ‘primitive hut‘.

The Office of Works style kiosk fell out of favour after the Second World War, and a modern replacement was found with metal poles and plywood fascias. These in-turn yielded to functional derivatives of the Wendy house, garden sheds in effect, which provided a somewhat neutral contribution to the heritage site.

Utilitarian, and noncommittal to its setting, the ticket office at Old Sarum is an example of a shy response to the bombast which preceded it. Perhaps more at home alongside a paddock, this clapboard shed design is not uncommon at heritage sites.

The ticket and information kiosk at Winkworth Arboretum is another utilitarian design. Its scale and form align it more towards a garden gazebo, however it is unchallenging and it succeeds in being neutral to its surroundings.

The entrance kiosk at Ickworth straddles the main drive, and as such needs to diminutive in scale. It too takes on the guise of a gazebo, however unlike the Winkworth Arboretum design, it contributes to its setting, and the steeper pitch of the roof and window details add charm.

It is clear that the gazebo form is an enduring design for kiosks, and we can see the octagonal plan shape is popular from the masonry Lutyens’ kiosks through to timber examples. The ticket kiosk at Hatchlings Park represents the more recent, and growing trend to return to a natural timber finish which the Office of Works identified as being aesthetically complementary to heritage sites. Coupled with quality construction and detailing, this is a successful model for kiosks.

The refreshment kiosk at Framingham Castle represents a mature design. Its setting within the bailey of the castle demanded good quality design, and detailing; and this level of finish provides an exemplar model which could easily be used at other heritage sites.

Bespoke kiosks to a contemporary design

Traditional designs generally fit in well at heritage sites, and this near-universal success clearly makes this route appealing when designing a kiosk, however some of the most successful kiosks are bespoke and respond to their setting with a contemporary design.

The ticket kiosk at Tintagel Castle embraces a challenging site and fits into the landscape. Whilst it uses timber, the kiosk is compromised by the stained timber finish, which is less successful compared to the naturally silvered timber around it. The finish has failed at the base of the kiosk and columns, and a silver-grey finish would have harmonised more successfully with the turf roof.

Is a universal design possible today?

As can be seen by the Tintagel kiosk, a kiosk can respond to the often demanding requirements of heritage sites, and when successfully incorporated, can create a sense of arrival yet respect the site. But, whilst bespoke kiosks in a contemporary design can succeed in integrating themselves into a landscape or ruin, should stand-alone kiosks continue to be constructed in the vein of traditional summer houses?

The Arts-and-Crafts ticket offices designed by Baines were successful in that whilst having a strong aesthetic, they were sympathetic to their environment. A good kiosk becomes a picturesque feature in the landscape — it fulfils a useful purpose and looks attractive in the process. This does not preclude a modern design — indeed part of the reason the Arts-and-Crafts became a successful style for kiosks was because it was a contemporary interpretation of traditional construction.

So, allowing for contextual adaptions, we might use a contemporary take on the Arts-and-Crafts to create our kiosks today — for instance, using the timeless timber of old, but revitalise the style with stainless steel elements in their construction. A kiosk which addresses its setting, yet is imbued with the mellow harmony of the Office of Works palette is on course to being a successful realisation.

Using this model — a contemporary interpretation of one made successful by the Office of Works — it is possible to create a new universal design pattern for today’s heritage sites. The twenty-first century kiosk will transform the visitor experience, and respond to the technologies which liberate the many possibilities for interpretation we now have.

I hope you have enjoyed this article and invite you to leave comments on the form at the bottom of this page. You can find out more about my thesis — A Prospect of Ruins – Discovery, exploration and contemplation — on my thesis page. I am currently in the second year of the Building Conservation PG Diploma course at the Architectural Association. 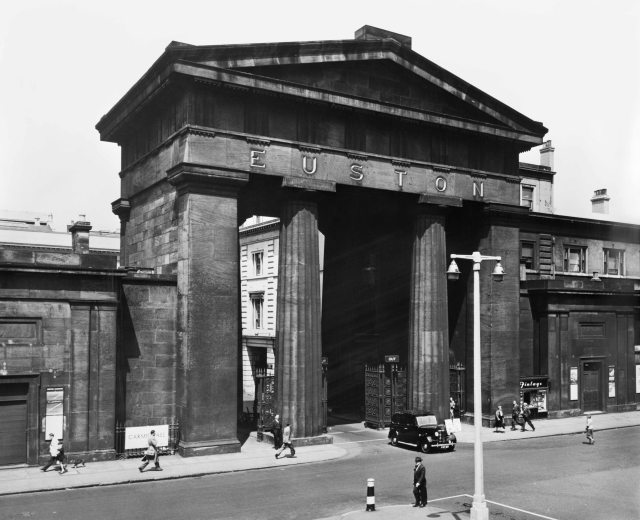 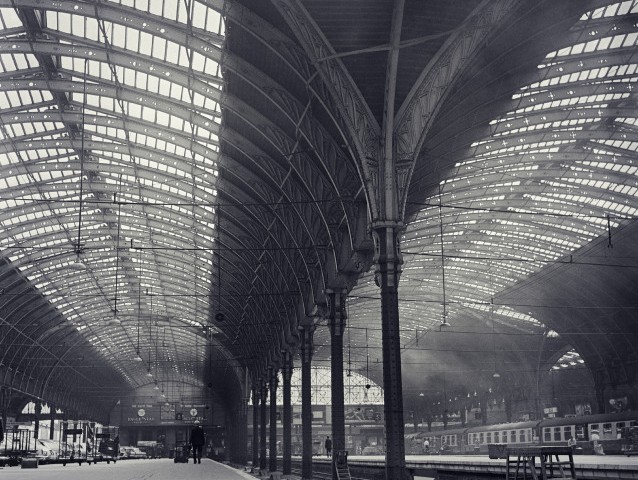